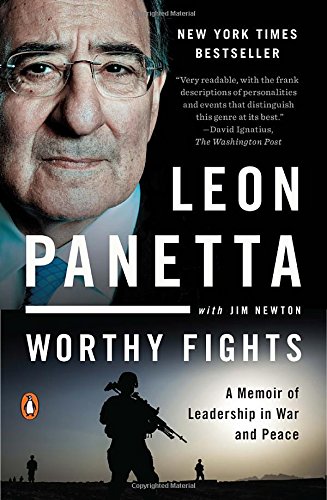 Titulo del libro: Worthy Fights: A Memoir of Leadership in War and Peace

Leon Panetta has had two of the most consequential careers of any American public servant in the past fifty years. His first, beginning as an army intelligence officer and including a run as one of Congress's most powerful and respected members, lasted 35 years and culminated in his role as Clinton's budget czar and White House chief of staff. He then 'retired' to establish the Panetta Institute,to serve on the Iraq Study Group; and to protect the California coast. In 2009 he accepted what many said was a thankless task: returning to public office as the director of the CIA.

Review
'The US president's lack of leadership on withdrawal from Iraq left the country to slide into sectarian chaos, writes his former defence secretary Leon Panetta.' An extract from Leon Panetta's memoir appeared in The Sunday Times
'Writing kiss-and-tell memoirs is as old as the US republic. But few presidents have had to suffer as much from them while still in office as Barack Obama. The publication of Worthy Fights by Leon Panetta, Mr Obama's former Pentagon chief and head of the Central Intelligence Agency, marks the fifth such book by a senior official in Mr Obama's administration. Because it is written by a traditionally loyal and highly disciplined elder statesman, it will count as among the more damaging.' - Financial Times
'Leon Panetta says Obama administration brushed aside push for troops to stay behind in Iraq because it was 'eager to rid itself of' the war.' - --Daily Mail


Leon Panetta served as the director of the Central Intelligence Agency from 2009 2011, and as secretary of defense from 2011 2013. An Italian American Democrat, he was a member of the U.S. House of Representatives from 1977 1993, the director of the Office of Management and Budget from 1993 1994, and President Clinton's chief of staff from 1994 1997. He is the founder of the Panetta Institute for Public Policy, and has served as professor of public policy at his alma mater, Santa Clara University.
Jim Newton is editor at large of the Los Angeles Times, where he has worked for twenty-five years as a reporter, editor, bureau chief, and columnist. He is the author of two critically acclaimed biographies, Justice for All: Earl Warren and the Nation He Made and Eisenhower: The White House Years.