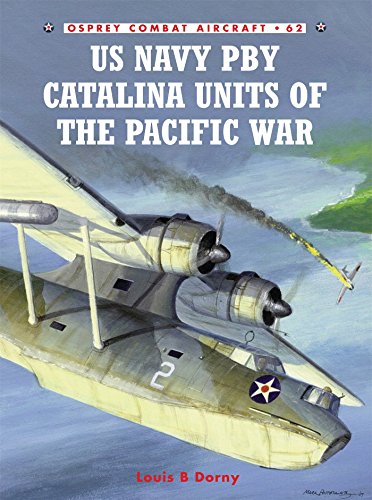 Críticas ""...Louis B Dorny's book here does an excellent job of covering the history of the Catalina in the Pacific theater of the war. Well-researched an accurate, Dorny's book is one that every Catalina enthusiast should own."" --Bob Bullivant, PBY, Catalina International Association Newsletter (December 2007) ""The PBY has been described in many books, but this title fills a niche with detailed descriptions of Catalina unit and individual actions throughout the Pacific War."" --Louis B. Dorney, International Plastic Modellers Society (August 2008) ""The author has divided the book into the various stages of the war, with a considerable emphasis on the first year of the conflict, when hard pressed PBY units were at their most active... It makes for an excellent addition to the series and I know you will find it to be as interesting a read as I."" --Scott Van Aken, modelingmadness.com (December 2007) ""Osprey has now published two books covering both the Atlantic and Pacific theaters. Units of the Atlantic War has 32 color plane drawings, Units of the Pacific War has 31 ... The combat history of the PBY Catalina in every theater of the war is more interesting than one would consider. The PBY books revealed information that I had not considered about the valuable contribution these planes made toward defeating Germany and Japan."" --Michael Koznarsky, Historical Miniature Gamer (Issue 10) ""Louis B Dorny's US Navy PBY Catalina Units of the Pacific War is the second of two volumes...: each volume packs in vintage black and white photos, history and close-up shots of the plans and each comes packed with statistics and history."" --The Bookwatch (December 2007) ""Besides providing a history of the development of seagoing aircraft, the author describes many of the combat actions in which the PBYs were involve, and the wealth of photos and color illustrations depict the unit markings and other features in fine detail."" --WWII History Magazine (August/September 2008) ""Among the most popular Osprey Publishing titles are those in the Combat Aircraft series. Louis B Dorny's book in this series focuses on the role of the PBY Catalina maritime patrol aircraft in the Pacific War. The result is an excellent overall account of this aircraft's career and operations during the Pacific War... This is a perfect example of an Osprey title filling a nice that would probably otherwise be overlooked."" --Mark E Stille, WWII Quarterly (Winter 2008) Reseña del editor Deadly in its primary role as a submarine hunter, the PBY Catalina was the scourge of the Imperial Japanese Navy's submarine force. Its amphibious traits also made the aircraft well suited to air-sea rescue, and thousands of Allied airmen were saved from a watery grave by PBY crews. Using personal interviews, war diaries and combat reports combined with original Japanese records and books, Louis B Dorny provides a view on the role of the Catalina from both side of the war. Illustrated with over 80 photographs and colour profiles detailing aircraft markings, this is the definitive history of an insight into the PBY's use by the US Navy and Allied forces in the Pacific during World War 2. Ver Descripción del producto