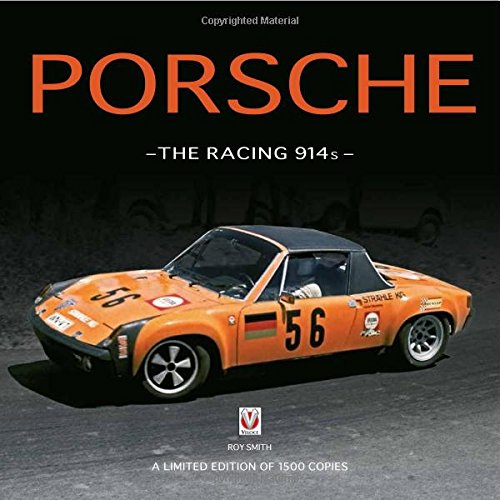 There are still those who see the Porsche 914 model as a funny little car, compared to the immortal 911. Granted, in its day, professional rally drivers were not keen on the 914: they were nervous driving it at the limit. Yet the records show that 914s were driven to at least 41 class wins, and at least 71 positions on the other two steps of the podium in Regional, National, and International Rallies. Racing on the circuits of Europe, 914s came home first in their class, and even took overall victory many times. In the USA, in IMSA GTU championship, in nationals, and internationals, it was the same story and that s not counting the multitude of SCCA regional races. The 914 first raced in 1970 ... the last? Who knows: even now they re still used in the USA s SCCA GT classes. 'Porsche the Racing 914s' is a study in pictures, statistics, factory information, and interviews, that will show the Porsche 914 in a whole new light. This richly illustrated book is released as a limited edition of only 1500 copies - a must have for all Porsche 914 and racing enthusiasts.

Review
You probably think you know your Porsche history inside out. You won't until you read this book. Superb. --Classic Cars

Roy Smith tells you all need to know about the Porsche 914 in a way you can't stop reading ... Porsche the racing 914s is a book that should be in any Porsche or race library. --Liebe zu Ihm (love for Porsche)

This new book offers an opportunity for readers to understand throughly the antecedent racing history of the 914s. However, if this new work sounds appealing, be quick, as this tome is limited to just 1,500 copies. --Vintage Racer


Roy Smith s keen eye for detail was developed during a 40-year career in sales and marketing. Having written for club magazines during the 1960s, interviewing notables of the time, when Roy retired from business in 2003, he decided to turn his attention to writing about motor sport, and now has six previous works to his name, as well as continuing to contribute specialist articles for websites and magazines worldwide. As with Roy s previous titles, his aim with this book is to provide a good read to newcomers and hardened enthusiasts alike. Previous titles by Roy Smith include: Alpine & Renault - the sports prototypes (two volumes), Alpine & Renault- the development of the first Turbo Formula 1 cars, and Amedee Gordini - a true racing legend.